Some of you might remember that well-worn phrase “positive-negative space” from art school days, representing the form and background in a painting. When I taught a basic drawing class many years ago I got a renewed interest in this concept. I noticed that our eyes could focus on positive space or negative space but not both at the same time. For instance, if you place your hand palm down on the table and spread your fingers out a bit, the fingers and hand are the positive space, and the space in between the fingers are negative space. Try it out. I can make my eyes focus on one or the other, going back and forth between the fingers and the space, but can’t really get both in focus simultaneously.

To the left is a painting by M. C. Escher who used this optical trick idea as the basis of his work. In my class I noticed that figures would get out of proportion if students only focused on the positive form – the figure – but when they consciously drew the space around the figure – the background or negative space – the figure would improve tremendously. The phrase “negative space” must have seemed too negative to some, because I noticed other teachers referring to it as “Figure-Ground”. My favorite phrase was “Figure and Arena” which reminded me of a performer in a circus. When I started teaching abstract painting I liked to use the term “charged space” instead of our old buddy “negative space”.

A friend of mine gave me a refreshing look on this subject. He would look at someone’s painting, and analyze it by seeing the background as the artist’s “inner” self, and whatever forms were painted (objects for a still life, brushmarks in an abstraction) symbolized the artist’s projected personality – what parts of ourselves we allow visible to other people. I decided to look at my work retrospectively in these terms and was surprised to find that in fact, there must be some truth to this. 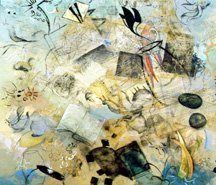 Here to the left is a painting I did years ago. There are many floating forms, and it has a crowded or busy feel to it. At the time I painted it I was trying to deal with lots of obligations in my life – not enough time spent alone.

Then I painted the one below. It’s hilarious to see that I have actually pushed the forms off the canvas, but still hanging on “stage” at the far right edge. At that time I was spending more time alone in my studio. 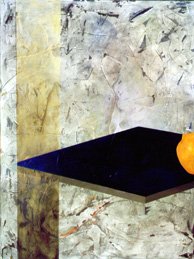 Now I am meditating much more on a daily basis, especially before I paint, and my current work feels like its all “charged space”, and in fact I like calling them “energy fields”. 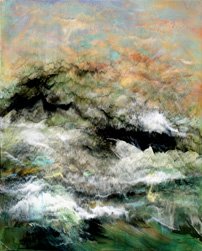 5 thoughts on “A Positive Look at Negative Space”

This site uses Akismet to reduce spam. Learn how your comment data is processed.

Nancy Reyner paints exotic versions of heaven, using gold leaf and other unusual materials. A contemporary abstract painter, she feels art is a rewarding pursuit that adds quality of life. Nancy shares this passion with her students and offers classes, articles, books & videos, encouraging the courageous use of materials and artistic expression. View her Youtube videos here.